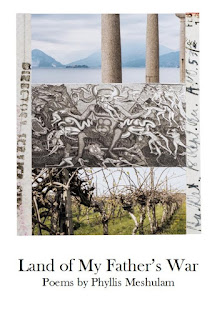 Phyllis Meshulam first went to Italy, where her father had been stationed during World War II, at not quite five. Threads of those journeys are woven into her newly-released book of poems, Land of My Father’s War, from Cherry Grove Collections. Joy Harjo, winner of the 2017 Ruth Lilly Poetry Prize, said of Meshulam’s book, an “urgency of spirit has emerged eloquently here in these poems of perception and even prophecy….” Meshulam is also the author of Doll, Moon (Finishing Line Press), Doors (War and Peace Press) and Valley of Moon (d-Press). She is a veteran teacher for California Poets in the Schools and coordinator for Poetry Out Loud, and has been a presenter at the nation-wide writing conferences, AWP and Split this Rock.  Her work has appeared in magazines from Earth’s Daughters and Phoebe to Teachers & Writers and Tikkun.  Meshulam has an MFA from Vermont College of Fine Arts. For CPitS’s 50th anniversary, she edited, Poetry Crossing, which Poetry Flash called “a truly joyful collection of lessons, inspirations, and children's poems.”

Southeast Asian Rain
Above and Beyond Exhibition, National Veterans Art Museum, Chicago
The breathing space within the gallery

ringing each other like a wind harp,
or sun-scattered rain on the roof
of a Quonset hut. What’s
in a dog tag? Name, blood type. A small mirror.

Each is labeled. B positive,
or be excluded or dead. O for negative,
or zero. O for other. Each belief

system reduced to one of a few
graced faiths. P for protestor. C,
for catharsis. J for jungle. An identity –


forgotten tiger, lamb, or forest fire.
Posted by PoetryExpressedBerkeley at 1:00 AM