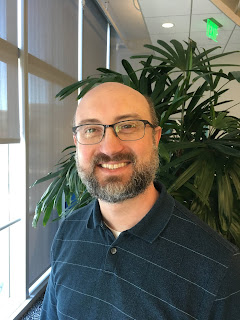 Originally from Salem, Oregon, Scott Caputo has had a life-long love affair with writing poetry and creating games.   His work has appeared in Red Rock Review, Ruah, Haight Ashbury Literary Journal, and Saranac Review.  Blue Light Press published his second book of poems, The Bridge Under Construction, in 2019, and his first book, Holy Trinity of Chiles, in 2010.  "Memories of a Preemie" was nominated for the 2019 Pushcart Prize.  He also has five published board games, including Völuspá, based on the Nordic epic poem of the same name.  He currently resides in Newark, California, with his wife and two sons.

Memories of a Preemie

So I hoped for my son
who lived his first weeks
in a heated box
hooked to heart monitors
a feeding tube
threaded up his nose
down to his tiny
walnut-sized stomach
all day a slumber
under bright blue
bleaching yellow
from his fresh skin
eyes closed
to the world.

Evenings after work
I scrubbed my hands orange
before entering the NICU
a room punctuated
by heart and breath
monitors beeping
suddenly screaming
before settling again.
Nurses rowed between
shuttered pods
cheerful blankets
hiding the one inside.
I held my son to my bare chest
let him feel my body heat
before putting him back
inside his incubator
for night after night.

My wife and I
hoped his first weeks
of solitude
would barely smudge
the mirror of his mind.

But months later
well after he came home to us
well after he learned to smile
we brought him back
to be with his former
roommates and nurses
a party with balloons and cake.

I did not expect how strongly
my son would embrace
his daytime nurse.
He last saw her when he was only
a few weeks old.
He gripped her with everything
a six-month old could give.
Somewhere deep inside
he was being held again
outside his glass box
human touch
timeless and warm.
Posted by PoetryExpressedBerkeley at 9:00 PM No comments:

Dennis J Bernstein lives in San Francisco. He is the award-winning host/producer of Flashpoints, syndicated on public and community radio stations across the United States. Bernstein is the recipient of many awards for his work, including the 2015 Pillar Award in Broadcast Journalism. In 2009, Pulse Media named him one of the “20 Top Global Media Figures.” Bernstein’s articles and essays have appeared in numerous newspapers and magazines including The New York Times, Denver Post, Philadelphia Enquirer, Newsday, The Nation, Dallas Times Herald, San Francisco Chronicle, Boston Globe, Mother Jones, Village Voice, The Progressive, Vibe Magazine, Spin Magazine, Toronto Globe, Kyoto Journal, Der Spiegel, and many more. Bernstein is the author of Henry Hyde’s Moral Universe, and the co-author of two decks of political trading cards, Friendly Dictators and The S&L Scandal Trading Cards. He founded The Muriel Rukeyser Reading Series in Park Slope Brooklyn, and broadcast it over public and community radio in New York City; the series was named after his friend and mentor, the late poet and biographer, Muriel Rukeyser. Bernstein also produced the first complete live, 35 hour broadcast of James Joyce’s Ulysses in the U.S. at New York’s Bloomsday Bookstore. He is author of the poetry collection Special Ed: Voices from a Hidden Classroom, which won the 2012 Artists Embassy International Literary Cultural Award. His poetry has appeared in The New York Quarterly, The Chimaera, Bat City Review, The Progressive, Texas Observer, ZYZZYVA, Red River Review, and numerous other journals. Alice Walker, Pulitzer Prize winning author of The Color Purple, writes that Special Ed “is art turned to us through the eyes of love.” Carol Smaldino says in The Huffington Post that the poems remind us how “we are all connected to the sorrows as well as to the grandness of being human.” Bernstein’s earliest  poems appeared as a chapbook, Particles of Light, with woodcuts by Stan Kaplan. His artists’ books/plays French Fries and GRRRHHHH: a study of social patterns, co-authored with Warren Lehrer, are considered seminal works in the genre, and are in the collections of the Museum of Modern Art, the Georges Pompidou Centre, and other museums around the world 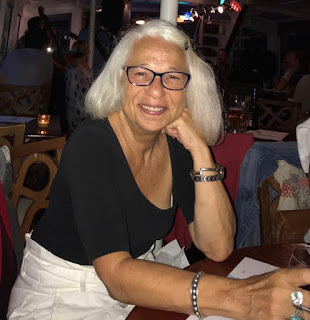 Lenore's poetry collections form a trilogy about love, loss, and being mortal: Cutting Down the Last Tree on Easter Island (West End Press, 2012); Two Places (Kelsay Books, 2014), and The Golem (Hadassa Word Press, 2017). Her most recent poetry chapbook is From Malls to Museums (Ethelzine, 2020), and her  prize-winning flash fiction chapbook, Holding on to the Fringes of Love, was published by Alexandria Quarterly Press. Lenore tutors middle-school and high-school students in reading and writing and volunteers at Chapter510 in Oakland, California.

Get Your Dervish On

The call to prayer resounds five ties a day. The calligraphic signatures of ancient architects appear on ebony doors encrusted with mother-of-pearl. Turkish is related to Hungarian, the same Ugric-Altaic language stem akin to Finnish, also possibly, Korean and Japanese. Think Mongolian. According to guides, the city is built upon layers of who did not like whom. Green and blue chariot teams once faced off along political lines. Ethnic groups fill out the corners of the city. Think Kurds, Greeks, Armenians. Scratch a civilization. Find a welt. We visited a Whirling Dervish ceremony. Ten dervishes appeared in black gospel-like robes, hands tucked across chests to signify the unity of God. One leader sat on a red sheepskin and kissed each hat as dervishes bowed. Save for black robes, everything else was white. Off with the black, spin toward the white. The fundamental condition of our existence is to revolve like atoms, something I heard from a yoga teacher. White skirts billowed into human planets of love. The ceremony ended with a prayer for peace.  Fade to black.

LinkedIn profile:
http://www.linkedin.com/in/lweiss
Posted by PoetryExpressedBerkeley at 1:02 PM No comments: