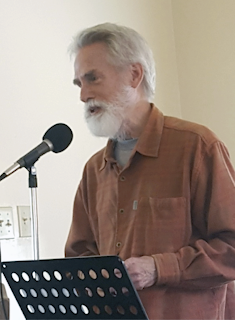 Thomas Eric Stanton [American, 1947– ]). Is primarily known as a California Surrealist. His works engage many mediums, and often emphasizes the aspects of 'Performance'. He has produced books of poetry, and his Paintings are included in many public, private, and museum collections. He lives and works in Benicia, California. He is the current Poet Laureate of Benicia, California 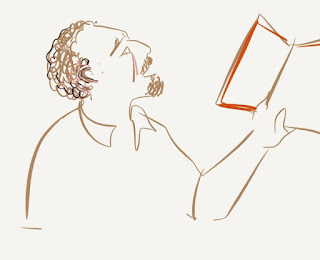 --??
Posted by PoetryExpressedBerkeley at 9:30 PM No comments: 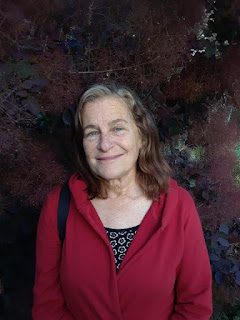 Sandra Anfang is a poet, teacher, and visual artist. Her poems have appeared in numerous journals, including San Francisco Peace and Hope, Unbroken Literary Journal, Rattle, and Spillway. Her chapbook, Looking Glass Heart, was published by Finishing Line Press in 2016. Road Worrier: Poems of the Inner and Outer Landscape (Finishing Line Press, 2018) followed. A full-length collection, Xylem Highway, was released in March, 2019 from Main Street Rag. Sandra was nominated for a Best Short Fictions award and a Pushcart Prize. She is founder of the monthly series, Rivertown Poets, in Petaluma, California, and a California Poet/Teacher in the Schools.

At the Nevada mining museum
our seven-year old has a chokehold on my arm
timid at first, his tentative eyes—
as if searching for rattlers—
sweep the iron-incensed bunker
before they lock on the rows of core samples.
He pronounces the name
which doesn’t quite fit in his mouth
carves new grooves on his tongue.
The desiccated docent
voice bald as his quarry explains
how cylindrical drills drone deep into stone
probe Earth's mantle
yielding smooth columns, pygmy pillars
relics of a place where dinosaurs
once cut their terrible teeth.
Drawn in, my child dons a scholar’s mask.
This is proof of something real
a piece of the fossil record
truer than anything I can give him
a staff to wrap his brain’s heart around
a bed of rock his feet can trust
no ephemera in this metamorphic floor.

I flash on the day I could finally read most anything
the skeleton key of my brain cracking the code
translating the thatch of storefront signs
the irony of the missing “i” in “realty”
my hopeful eyes pleading with my mother:
can we bring some home?
At five I knew we were already fresh out.

Sandra Anfang
Posted by PoetryExpressedBerkeley at 9:00 PM No comments: 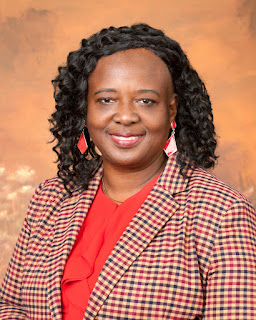 Juanita J. Martin is Fairfield’s first poet laureate, 2010-2012. She’s also a freelance writer, andperformance artist. Her poetry book, The Lighthouse Beckons, was accepted into the SolanoCounty Library. Martin’s next volume of poems, Quiet Intensity, is due out in 2019. She’spublished in Blue Collar Review, SoMa Literary Review, and others. Juanita is active in InaCoolbrith Circle, and Benicia First Tuesday Poets. Juanita was also a longtime member ofRedwood Writers from 2007-2017. Juanita is listed with Poets &amp; Writers Directory of Poets. She has read at the Frank Bette Cultural Center for the Alameda Poets in the Annual Black History event. She often reads for the Beat Poetry Festival and 100 Thousand Poets for Change. Juanita has been a featured reader with Healdsburg Literary Guild, Petaluma Poetry Walk 2007 &amp; 2016, as well as Berkeley Poetry Festival. She has also contributed to Sonoma Discoveries Magazine, a tourist magazine covering North &amp; West Sonoma County, and the Coast.www.jmartinpoetwriter.com

A shale-colored moon spotlights
A bittern at one end
The lonely end,
Where the wine of antipathy
Pours into a tall glass

(Third Place Ribbon-Solano County Fair 2016)
Posted by PoetryExpressedBerkeley at 8:40 AM No comments: 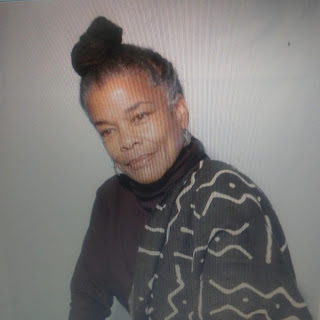 Why alter the altar?
Silence the Arc for an Ark?
Why douse sacred fire of every kind?
Who enters prize for this enterprise?

Why did the son of the sun worship with warship?
Prey on those who pray for peace,
Set sail for sale of piece,
With pair-of-dice for paradise?

Will joules perish in parish of jewels?
Who’s good is sacrificed for concepts of god?