12/4/2017 Clark Kent hosted by Jan 12/11/2017(Need a prompt?Is Superman a Golem? A golem is an animated anthropomorphic being that is magically created entirely from inanimate matter (specifically clay or mud). -- you don't have to use those words.) 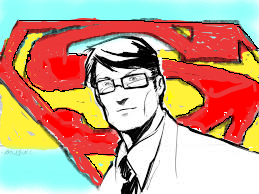 Clark Kent claims to have been forever maligned by the myth of Superman when in fact he has just been another bat in the belfry of life, seeking justice and peace in this troubled world. The comics who rule have long gotten Clark wrong, presuming Kryptonite to be his Achilles heel when in fact that radiant mineral is found within every person he meets.  That singular force travels the short divide from them to him, dispelling the dark forces of narcissism, rendering Clark human, vulnerable, and capable of poetic expression.

Zarathustra hides in a polar ice castle,
flies to the moon, leers at women with his X-ray eyes.
He is stuck in a rut waiting for earthquakes, sinking ships,
meteors on course to destroy the woman he avoids.
Each wood-pulped, flattened day he is summoned,
pulls phone booths out of thin air,
strips to pectoral splendor.
His speedo modestly bulges
as he rescues Lois Lane yet again,
again, again, again.
Old pages yellow and crack
until he longs to be a real Clark Kent,
Kryptonated, unbound,
a nakedly human man.

Posted by PoetryExpressedBerkeley at 10:14 AM