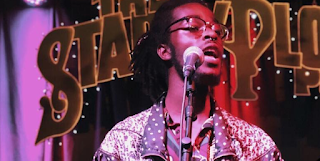 Reginald Edmonds is a poet, activist, and educator based out of Richmond, CA. Reggie was a member of the 2018 Berkeley Poetry Slam team and runs both the Rich Oak Alchemy Slam and the Oakland Poetry Slam and wide open mic. In their free time, they enjoy long walks through quiet graveyards, Hennessy with limes, and listening to trap music. They have two self published chapbooks, I’m Too Black For This Shxt (2017) and Sad Boi(2018).  Their poetry is map of intersections that illustrates the complexity of the human experience. Through their work, they hope you will come to understand how much we all contribute to the degradation of humanity, as well as what we can all do to turn this back around.

All of My Fish Die In the Middle of the Night and I Imagine Myself Alongside Them.

I awaken to twelve glimmering bodies bobbing on the surface. Their eyes
Are just as soulless in death as they were in life, bulging
Pupils staring into the void. A 5-year-old probably shouldn't bury
Pets by himself but nobody really gave a shit about lasting psychological
Harm in the early 2000’s so I had a toilet bowl funeral
Alone. Cried over the time spent excitedly pointing at the fish tank
Like “look at how responsible I can be mama? Don’t that make
Me a man now?” But haven’t I always tried to flush
My boyhood down the drain too early. Wasn’t I, in my foolishness,
Craving manhood with my morning cereal. The same masculinity that is suffocating
Me today. I should have learned that all That glitters is not
Gold… fish. sometimes, they are just pretty Things waiting for a prettier
Death. And what's more beautiful than a Broken dream? Than my body
Floating alongside twelve nuggets of gold? Mama says that ​gold look good
On us black folks. ​ And don’t I look good, Mama? Am I
Man enough for you, now? Wrapped up in so much Masculine gold
That nobody hears me screaming? That nobody notices me choking? Will anybody
Even know that I’m dead until the sun rises in the morning?

Posted by PoetryExpressedBerkeley at 9:00 PM