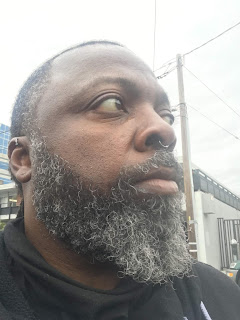 Juba Kalamka is most recognized for his work with performance troupes Sins Invalid and Mangos With Chili, and as cofounder of the queer hip hop group Deep Dickollective (D/DC). Kalamka's personal work centers on intersectional dialogues on race, identity, gender, disability, sexuality and class in popular media.


His essays and creative writing appear in numerous journals and anthologies including Working Sex:Sex Workers Write About A Changing Industry (2007), Vi är misfits! (2009),The Yale Anthology of Rap (2010), Recognize: The Voices of Bisexual Menand Queer and Trans Artists of Color: The Stories of Some of Our Lives (2014).    His third solo album Nguzo Sabatage: A Jig School Confidential and first collection of poetry, Son Of Byford, will be published in late 2019.

Posted by PoetryExpressedBerkeley at 9:00 PM