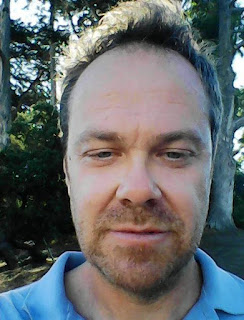 Chris Warren Smith has been a featured writer for Steve Arnston, Gina Goldblatt, Paul Corman Roberts, Bay Area Generations and Charise Sowells Malouf(Lake Lady)
He has been published in the Oakland Review, and East Fork Press. He first kid's book: A Tennis Lesson can be found in the Magic Blox children's library.
You can find more of his writing at his blog on Poeticous.com

Human Nature is smiling, holding out a closed fist.

Inside is a coin.

On one side is love and the other is fear.

Until she opens her hand the coin is two sided, representing duality.

It is in a state of superposition.

Only when she opens her hand will you witness your truth.

And you will see either fear or love.

What will you change today?

Posted by PoetryExpressedBerkeley at 9:30 PM