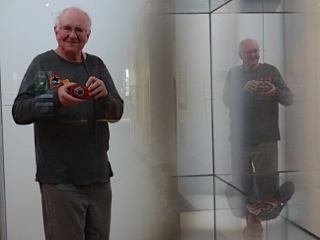 Tom Odegard (aka Tom/Ms.G) arrived in the Bay Area from Portland when he was eight, in 1948.  When he was 12 he set about writing a science book but soon discovered that he only knew enough to write the introduction at
which point he switched to poetry.  Since then he&#8217;s lived in many places in multiple states of mind, and written too many pages of words some of which he&#8217;s read at venues around the Bay or put into chapbooks.  He&#8217;s published two books: Friends Well Met &#8211; a collection of poems - and Past Lives Led &#8211; a poetic memoir both from Beatitude Press in Berkeley. He shuttles back and forth between Friday Harbor Washington and Oakland spending four months in California where he reads and writes and polishes his nest eggs. His poems have been published in a number of collections including, Spasso&#8217;s, Sacred Grounds, and Living in the Land of the Dead a production of Faithful Fools. In 2005 he discovered he was intersex and came out as a &#8220;Two Spirit&#8221;, Tom/Ms.G. He takes great delight in sharing his double gendered points of view with anyone who&#8217;ll listen.  Mark States favorably compared his poetry to e.e. cummings, to which accolade he remarked, &#8220;Yikes!&#8221;


&#8220;nothing but a deck of cards, you&#8217;re&#8221;We were just 21 in a casino in Tahoeknew everything and nothing as one does.Long, long time later, truncated journalswould abbreviate echoes of the known worldcity strife, foreign interventions, fanatic idealismboiled down to twitter feed and sound bites;but right there, at the black jack table,in 1961 a drunk playing keno taught us howto play if not win at black jack. He said,&#8220;you gotta be drunk enough not to care&#8221;at which point he won another keno jackpotand opined, &#8220;See what I mean?&#8221;IndigenousWe were all indigenous in Africa way back whenand the next chapter took us on long walk aboutsas drought set inand we spread out and spread out and the meatswere sweet like lamb and we filled up the landwith bones we wouldn&#8217;t see again.We were few on the ground,  particular as well,claimed some territory ours, and sent visitors to hell,cause now we were indigenous.The land was ours; we spread out, we spread out,ran buffalo over cliffs, counted coup on walk abouts,bones to the brim, yes,yes, bones to the rim&#8230;The land was ours &#8216;til strangers came on horsebackthe Aryan horde, the Spaniard horde, on horsebackon sailing ships, again, again, again and again&#8230;for land, slaves, treasure, and proof of might, proof of righta place to waste, a place to destroy, keeping inflation down,turning the middle into the poor while the wealth rode up.Now the winds increase, oceans rise, tornados blast,earth quakes,  bones pile up, the hunting is donethe fish are gone&#8230; &#8216;cause now we are indigenouseverywhere indigenous...

Posted by PoetryExpressedBerkeley at 1:00 AM