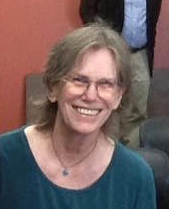 Sharon Elliott has been a poet activist over several decades in national and international social justice concerns, especially the rights of women and girls.  Her activism began in the anti-war and civil rights movements in the 1960s and 70s, and she spent four years working with women and teenage girls in the Peace Corps in Nicaragua and Ecuador, especially in multicultural women’s issues.  She is a Moderator of Poets Responding to SB1070, and has featured in poetry readings in the San Francisco Bay area. Her work has been published in several anthologies and her poem “Border Crossing” appears in the anthology entitledPoetry of Resistance: Voices for Social Justice, Francisco X. Alarcón and Odilia Galván Rodriguez, eds.  She has read it in Los Angeles at AWP and La Pachanga 2016 book launch, in San Francisco and at the Féis Seattle Céiliedh in Port Townsend, WA.  Her chapbook, Jaguar Unfinished, was published by Prickly Pear Press, 2012.  She was an awardee of Best Poem of 2012 by La Bloga, for The Day of Little Comfort.  She loves to mentor young poets and assist them in spreading their creative wings.  She is studying indigenous traditions of Scotland and Norway and is searching for the home of her heart with the guidance of her ancestors.  She is fluent in Spanish and is learning her traditional language of Scots Gaelic.  A true child of the north, she loves cats, stormy blustery days by the sea, and blueberries.